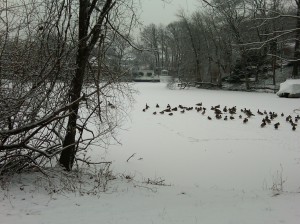 This the lake on my street. Hopefully you do not recognize it, because I do not want to be stalked. I thought it was pretty pretty. I walked down the block in my converse sneakers and slipped and slid a little. As I approached the ducks I was certain they would retreat from my presence, instead they started waddling toward me as if I were holding a large piece of bread or was a warm shelter for ducks or if i were holding their duck-brother for hostage. I don’t think I would ever hold a duck’s duck-brother for hostage, but who know’s what I would do if large sums of baked goods were involved.  Actually, I do know what I would do- I would hold that Mother Effing Duck-brother for hostage.

It was a bad idea to wear converses in the snow.

I read three books since I began working a little over three weeks ago. Therefore it can be concluded one book a week. Think about how many books I can read in a year! two years! seventy years! They better start writing more books. By “they” I mean humans. By “humans” I mean authors. By “authors” I mean James Patterson. I began listening to music while I read- something I was never able to do, but have received the ability through divine powers.

You can see me multi-tasking in the photo above. The converse sneaker seen in the upper left hand corner doesn’t belong to me, but rather a homeless teenager laying under the bus seats. Her leg was like up against mine. It was weird.