Today is April 28, 2010 A.D. The day that I discovered Sandra Bullock adopted a baby from New Orleans. I read about this story on AOL mail, which is embarrassing considering I have been on-and-off again friends with her for over a decade now. The last time I heard from her was a text on the night of the Premiere of “Blindside”. The text said, “btw I am trying 2 adopt a baby. Where should I order it from. ttys”

I met Sandra on the set of the 1998 dramatic movie “Hope Floats”. I was the stand-in for the kid Mae Whitman who played Sandra’s daughter, Bernice. The hours were long and I had to balance standing-in, being in school, and acrobatics classes. Sandra used to buy me milkshakes after the shoots. She told me I should have been the real Bernice, not the stand-in. I guess that’s why she invited me to the movie’s premiere.

She ended up trying to adopt me against my family’s consent, shortly after this picture was taken. I think because I used to wear such cute little Asian silk outfits [above]. The press coverage was out of control and my mother moved my father, sister and I away from LA to NY, enrolling us in a witness protection program. I was most upset about the fact that I had to change my name from Rebekah to Rebecca. 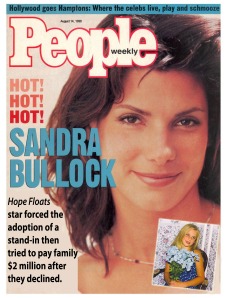 Sandra and I lost touch for years, until she found me on myspace. The age gap between us had lessened and we became great friends. I was the one who convinced her to die her hair blonde for “Blindside”. You’re Welcome.

2 thoughts on “Sandra Bullock tried to adopt me!”