I got to work early this morning and needed to go upstairs pick up a packet of papers. I took the stairs one floor up. The only way to get out of the stairwell is by using your ID card to swipe in. I entered the echoey vestibule and the heavy door slammed behind me. When I got to the door on the floor above, I went to go swipe in, and I looked to see I was holding my debit card. I checked my pockets for my ID. No luck. There are no phones to call outside and there was no way I could get back onto a floor.

This is the third time this has happened to me. I walked down a flight, stood at the door, and listened, knocking when I heard someone pass. I did this four times.

Finally the door opened slowly and I stepped back. I was curious to see who it would be, thinking it would give us a connection. I was also worried the person would think I “owed” them something due to the fact that they saved my life. It ended up being a guy from the other side of the floor who I didn’t know. As I was trailing him down the hall, I whispered, “I love you”. I can only hope he heard me.

When I was taking the picture above, I went into the stairwell, put the camera on a 10-second timer on the steps and prayed that no one walked through the door. As the camera was about to take the picture, the door opened. A shock of nerves lit up my back. I was like, Who is going to walk through that door?!!?! It turned out to be an awesome Writer/Director/Producer guy. He was a bit confused at what I was doing. Then he offered to take the picture. He said in all his years working here something like that never happened to him. hahaha.

I stood outside on the front deck last night on the ferry ride home. The sun had just set and the sky looked like it was burning with a pink fire. It was gorgeous. I kept pausing and saying “Look how pretty that is.”

No, popular to contrary belief, I was not talking to myself. I met one of our interns on the commute [while waiting at Chambers street] and we rode the ferry together. I took this as an opportunity to have him take my picture on the boat. [I usually ask tourists to do it]

Oh, hello shadowy face. I could have removed the shadow from the picture in Photoshop, and in fact, I did. I just liked it better with the shadow. I took an after picture of my hair to show how crazy it was after the ride. 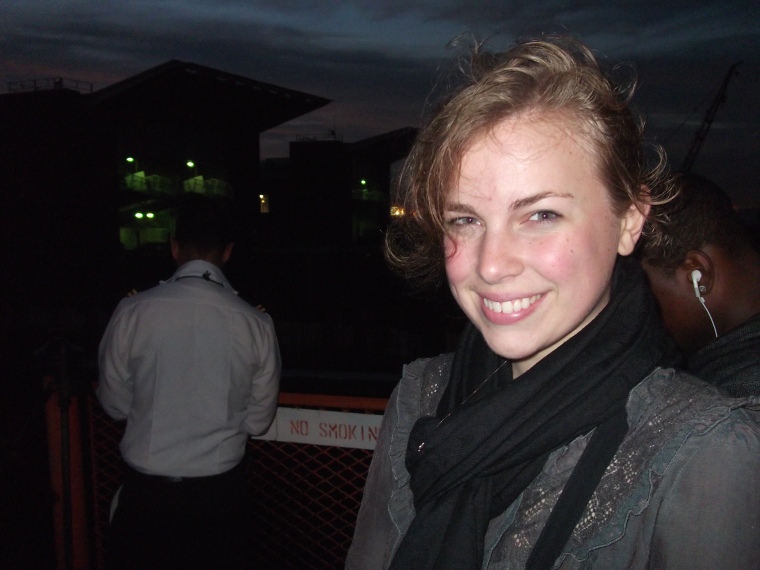 I asked my intern-friend where he usually sat on the ferry. He told me he stands on the outer deck. I said, “oh yeah, me too”. This was a lie. I always lie to people who I don’t know too well, to get them to like me. That’s how I roll. It is so freeing and therapeutic to stand outside the ferry, breathing in fresh air, after a long day at work– indoors, where I have no windows in view. There are awesome windows and awesome views down the hall, but that includes me getting up and walking. I’m not really into the whole “walking” thing once I’ve sat down for the day.

Actually, I’ve heard it’s not good to remain sedentary the whole day because this creates heart problems for humans in the future. Sitting for a majority of the day increases heart disease. It can be just as bad as smoking according to that website. I going to say that you definitely shouldn’t sit all day while smoking.

We watched Glee last night, which was Britney Spears themed. The blonde-headed girl from Glee, Britney, is so funny. Her one liners make me laugh.

I got a new wallet today! I saw it yesterday at Billabong, inspected it, left the store and searched for coupons online, then went back and paid $15 dollars for it, which was full price. This is the front of it. 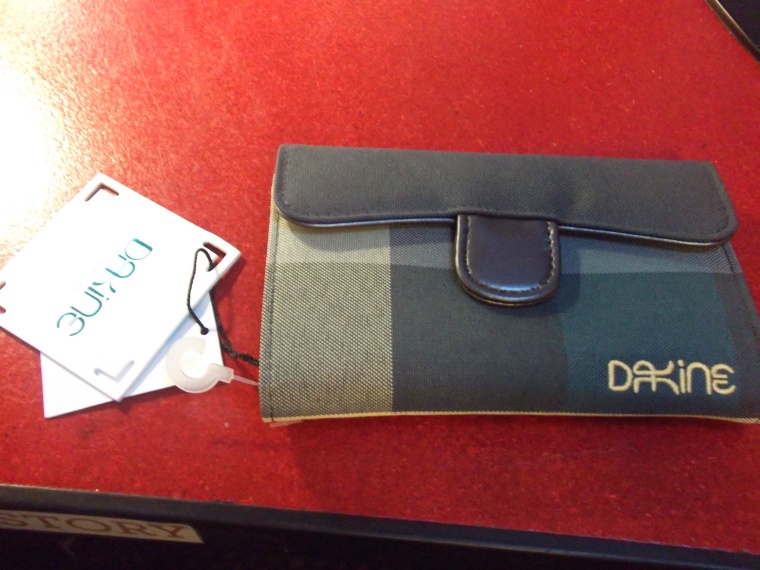 This is the back of it.

This is the inside of it.

I was genuinely excited to fill the wallet up with things from the old wally. Wow, I just wrote “wally” instead of “wallet”. Interesting. Haha. I just smiled at myself.

I’ve got to go. I hear knocking from the stairwell.

3 thoughts on “Locked in the Stairwell Again.”