There is something I need to confess that I feel really badly about.

Two weeks ago, I was rushing from work to catch the ferry home with ONE MINUTE TO SPARE.  I sprinted up the first set of steps from the subway two by two. My calfs were burning. [my legs, not my baby cows] I reached the platform and saw the next obstacle, the second set of steeper steps. [See Below] 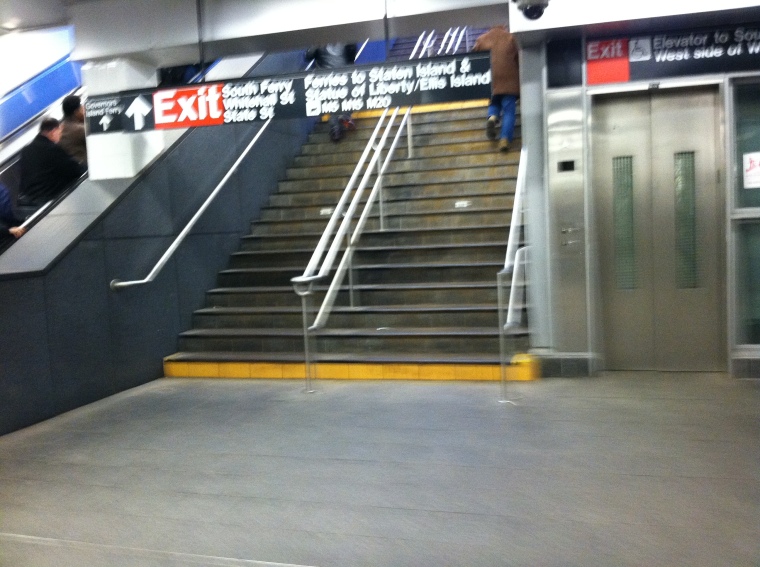 These stairs continue up three times the amount of stairs that you see pictured. I took a puff of my inhaler and began my final sprint. Oh…what I forgot to mention is that on the bottom step, there was a 60 year old woman laying horizontally. What happens next is the part I feel guilty about. 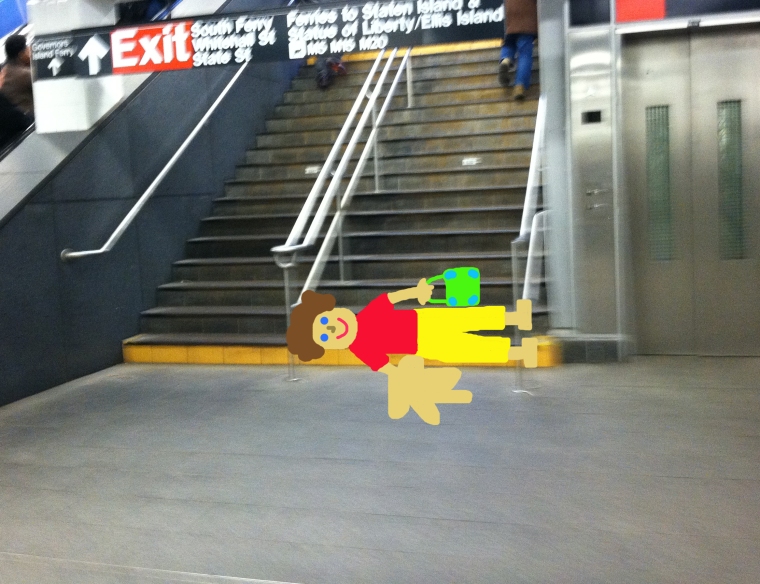 Some things to keep in mind:

1. The woman was human, not cartoon.
2. Her right hand was not actually that big. I just got carried way with the “brush” tool in Photoshop.
3. Even though she was on the ground, she had the biggest smile on her face.

In the rush, the woman had obviously fallen. I like to imagine she was struck with a wave of lethargy so strong she had to nap right then and there. I would feel a lot better if I knew she was just resting. When I first spotted her, I noticed she was smiling. She must have been self-conscious that she’d fallen; turning embarrassment into laughter. It came off like her pastime was lounging in the subway. She struggled to get up and looked as if she were strenuously trying to do a sit-up. She didn’t have great form.

I looked at my watch and saw it was 6:45pm. The boat would be loading. In the rip of a paper, I got a running start. I imagined her as a hurdle like in the sport Track. 1 step 2 step 3 step 4 step 5 step. In jumped over her in a beautiful split. I swear I heard camera flashes going off.  I got great air.

Some thing to keep in mind:

1. Yes, I was wearing a green leotard to work.
2.Yes my left leg is longer than my right.
3. Yes, I know I have no skill in making paint hands but I am pretty impressed with the picture’s overall outcome.

I’ll never know what happened to Pat. [I named her Pat in my mind]. But I hope she is resting happily in Heaven. No wait, I wish she were alive. Yes. Alive. If you recognize her from the cartoon, let me know who she is. I want to write her an apology; and keep in mind, her hand is NOT that big.

Watch this video of me being CREEPY
http://www.youtube.com/watch?feature=player_embedded&v=6y3TxoJ84DI

2 thoughts on “This is My Confession -USHER”