I attended the Paul McCartney concert last night at Yankee Stadium in the Bronx. Besides my most recent Urban Outfitters purchase, it was the best $100 I’ve spent in a while.

I went with my cousins Kaitlin and Blair. ‘Twas Blair’s last minute decision to buy the tickets. She ordered them off Stubhub.com, a website where people can buy and sell concert tickets. Here is a photo of my cousins relieved that the stubhub transaction was not a scam. Blair [L] Kaitlin [R]

My father and Kaitlin and Blair’s mother are siblings, hence our cousinship. During their younger years, our parents listened to the Beatles and continued to do so as we grew up.

We sat in section 108 in right field. I got the end seat which was pleasant. I wasn’t hotdogged in between anyone. Next to me was Blair; next to her, Kaitlin. Paul started to play at 8:15pm. He opened with the song Magical Mystery Tour. The crowd went wild as if they were rabid, undomesticated koalas.

When the music started, Kaitlin, Blair and I got out of our chairs. Everyone stood including the two leather vest wearing couples in front of us. We clapped and danced. We rhythmically moved our hips from side to side. I squeezed Blair’s hand in excitement. It was great. Suddenly, we heard yelling coming from behind us. A new couple had arrived. The woman was 5’5 in height with dark tiny ringlet hair. Her husband stood with his arms crossed. She screamed at us, “Sit down.” She motioned her hands as if she were dribbling two imaginary basketballs. “Sit down”. Blair, Kaitlin and I looked at each other with eyes saying, “Are you serious?”. If the crowd’s momentum was being measured by a cartoon thermometer, the entire thing would be shaded red. The whole staduim was standing up. She also told the leather vested couples in the row in front of us to sit. With those two words, my mood was ruined. I was mad at the woman. The cartoon thermometer’s red shading dropped as our butts hit the cushioned Yankee Stadium seat. We were forced to sit the entire concert. Every time others stood, I sat in fear of getting yelled at. We stood during the last few songs of the concert.

On the car ride home, Kaitin, Blair and I discussed the “sit down” event. We are very understanding people. I once saw my cab driver doze off and did not say anything because I didn’t want to make him feel bad. We realize it was not a “general admission” concert. Every ticket buyer is entitled to sit if they want to. If the woman approached us in a different manner, or asked us nicely to “please sit”, we would have been less insulted. It was the first song of the concert and everyone was so excited, hence standing. Not many people enjoy being yelled at. Especially when you’re in the middle of having a good time.

It took forty minutes and 15 songs to bring me out of my getting-yelled-at-depression [GYAD]. It was 85 degrees out and my pants were wet with sweat, but listening to McCartney sing Hey Jude, Yesterday, Lady Madonna, Eleanor Rigby and Blackbird was spirit-raising.

Blair and I have a history of crying at concerts due to the emotion songs bring us. We made a bet out of the two of us, who would cry first. My chances weren’t high, considering I cried at JingleBall 2000 after hearing JC Chasez sing Blowin’ Me Up (With Her Love). I lost the bet halfway into the concert when McCartney sang, I Will. I sobbed. 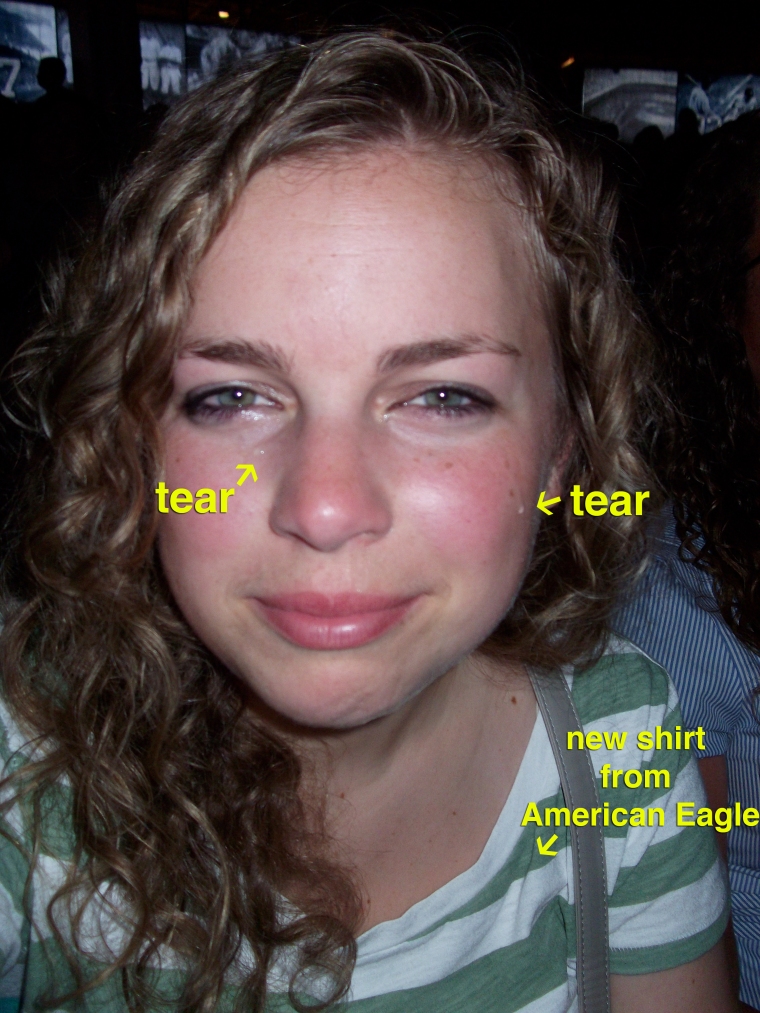 Paul McCartney has a lot of fans. It was weird to think they were all standing on the Yankeee’s field.

We were thirsty after the concert. Kaitlin brought a fountain diet coke. I had a sip. It was the best sip of diet coke I’ve ever had.

Forgot to mention I saw this weird sign on the drive to the Bronx. It read, “Becky this is your future self. Just sayin’ hi.” I can’t believe my future self abbreviates the word “saying”.

Blair gave her concert review in the form of  a “thumbs up”.

Kaitlin took a stellar photo of myself and Blair’s chin.