I had the ultra exclusive honor to interview my co-worker and friend Meaghan.

Meaghan and I met in our freshman year of college at a “Ham Channel” meeting. The Ham Channel is our student run television station. Its mascot is a Pig. In the club’s first meeting, the club’s president, a senior named Kelly, sat in front of the room. She asked me if I wanted to be the mascot because I “looked like a pig anyway.” She was joking, but I was a shy and insecure freshman. I pretended to laugh and excused myself from the meeting room. Meaghan found me in the hallway, sobbing. “She probably called you a pig because you are wearing a pink shirt,” Meaghan comforted me. I  looked down. I was wearing a green sweater. That’s when I first realized Meaghan was color blind.

Here is a picture of us from our sophomore year. It was taken in Meaghan’s dorm room. Meaghan is Left. I am Right. Her head fits perfectly into my neck cavity. 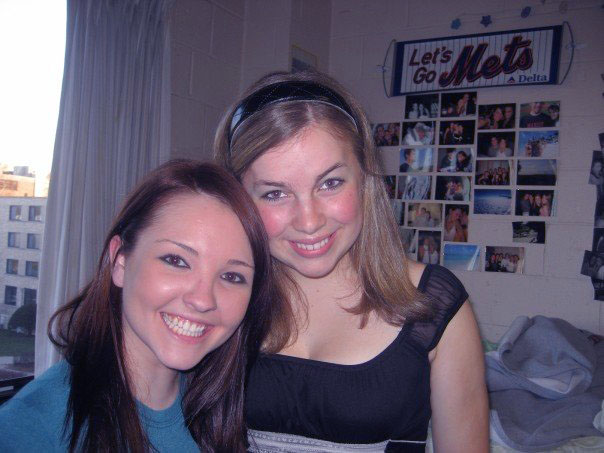 Mets memorabilia lined her walls. She was obsessed with the Mets. Every conversation she had with me started with, “Did you hear about Mike Piazza’s latest injury?” or “Jose Reyes’ struck out twice last game.” or “Girl, Ain’t nothing could be wrong with that hottie David Wright.”

I was about to depart for the school dance and decided to stop by Meaghan’s dorm room to show her my black dress. I relied on her approval of everything I wore. Meaghan didn’t attend the dance because it was a “Rainbow” theme. She was afraid she would get frustrated at herself for not being able to differentiate the colors.

6 years after that first television station meeting, Meaghan and I work together in a television company. It has neutral-colored walls. Check out this interview I had with her today.

b: What was the scariest moment for you of Hurricane Irene this past weekend? What was the most fun moment?
m: Hmm, well Rebecky, may I call you Rebecky?
b: Sure.
m: The scariest part for me was Colin (my boyfriend/roommate/handyman) attempting to unscrew our gigantic air conditioner that’s built into the window to cover it with a tarp to prevent leaking and it almost fell out the window, down 5 floors.
b: Holy Cow! If that AC unit fell on a passerby’s head, no doubt you would have been sued. You also would have suffered from extreme guilt.
m: The actual storm was fun in comparison to this.  And so was the drinking I did during it.

b: Beyonce revealed she was pregnant two nights ago at the MTV Video Music Awards. If it’s a girl, what do you think she will name her child? If it is a boy?
m: I believe “House of Dereon” would work either way.
b: I believe that can be classified as an “ambi-name”. For those of you who don’t know, House of Dereon is, “a ready-to-wear fashion line introduced by singer and actress Beyoncé Knowles and her mother/stylist Tina Knowles.” [Google Dictionary]

b: How old were you when you were first allowed to wear makeup? Do you remember the first time you wore it? If so, describe.
m: I started to wear makeup to school in 5th grade before I was actually allowed.  It involved a lot of glitter and poor execution (think Ke$ha, but worse).
b: Excellent example.
m: Problem was, I got caught all the time because my mother was the kindergarten teacher at my grammar school.  She actually escorted me to the bathroom and made me wipe it off in front of her.  Plan foiled.  I really started wearing it regularly in college, just because I went to an all-girls high school where general hygiene was a rarity, nevermind a full face of makeup.

b: Would you wear your hair in a humungous “poof” [like Snooki] every day for three years in exchange for 500,000? Or would you choose to not do it, and not get the money?
m: Tax free?
b: Yes.
m: Absolutely.  Money up front, please.
b: I like the confidence in your answer. I’m going to give you the money and not even make you wear the “poof”.
m: Score. 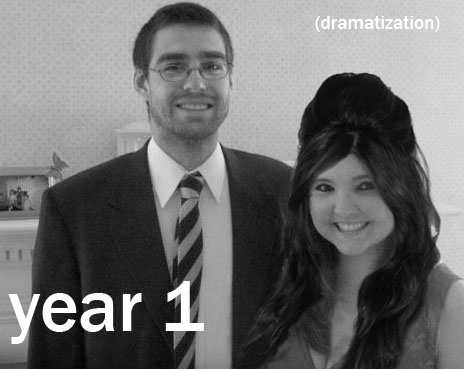 b: Do you think your family’s house in Connecticut is haunted?
m: Interesting question.
b: Thank You.
m: Yes.  Growing up there were several, shall we say, “happenings” like footsteps, up and down the basement stairs, the back door opening and closing, and lots of tea cups clanking throughout the night or even being set up on the counter the next morning.  Once, the stove was put on to boil tea without anyone doing it, which is helpful but scary.  Deductive reasoning tells me an old British lady ghost lives in the house.  There’s a lot more but I don’t want to think about it because I may go there this weekend.
b: Sounds like it could be the ghost of Mrs. Doubtfire. I read in “Star” Magazine that she was murdered. 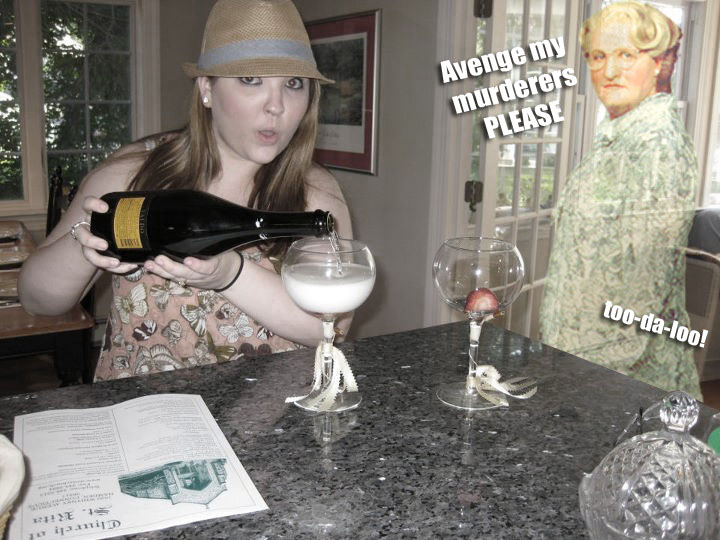 b: Do you own a dog? If so, what is his/her name? What kind of dog is he/she? Would you die for him/her?
m: Oh yes.  I have a French Bulldog named Munch (named after Detective Munch from Law and Order SVU).  I’m not even ashamed to say that I have become one of those people that would die for my pet.  Although he can be rude sometimes, like when eats my shoes or takes my seat when I get up from the couch, I think he would do the same for me.
b: Well, do you call “save seat” before you get up?
m: I do!
b: Oh. He is rude. But really cute. 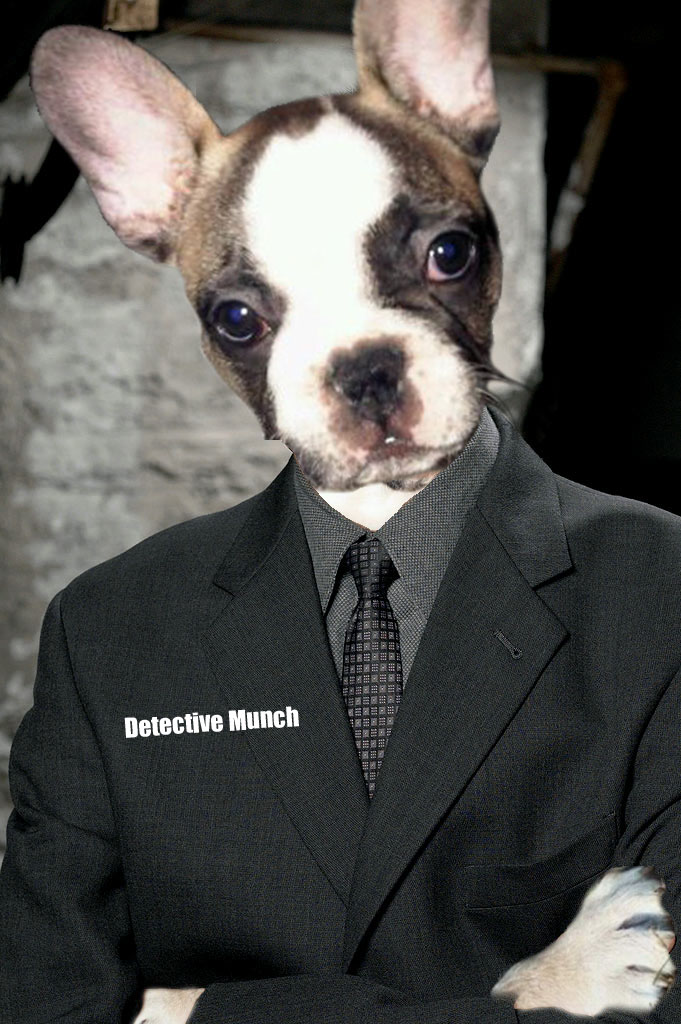 b: Truthfully, what are your feelings on the existence of leprechauns?
m: I’m 100% Irish so it’s my religion to believe in them.
b: Amen, Hallelujah.

b: Would you rather live the life of country singer Reba McEntire or Kate Hudson’s columnist character in How to Lose a Guy in Ten Days?
m: Tough call.  Reba has a great voice and that heavily syndicated sitcom that I would watch between classes in college.
b: True.
m: Kate Hudson’s character had a great job, with great perks BUT she wasn’t allowed to write about important issues and Lilith from “Frasier” was her boss, which must be terrible.  Reba it is.

b: Would you rather live the life of Matilda from the movie Matilda or of Annie from the movie Annie. [Things to keep in mind: Matilda’s father is Danny Devito, Annie has no parents]
m: Annie.  Allow me to explain.  Matlida’s parents are awful- I don’t care if her mom was on “Cheers”.  Daddy Warbucks, can pay for therapy and to fix my yellow afro.  Plus I used to think it would be pretty sick to roll with that orphan gang. 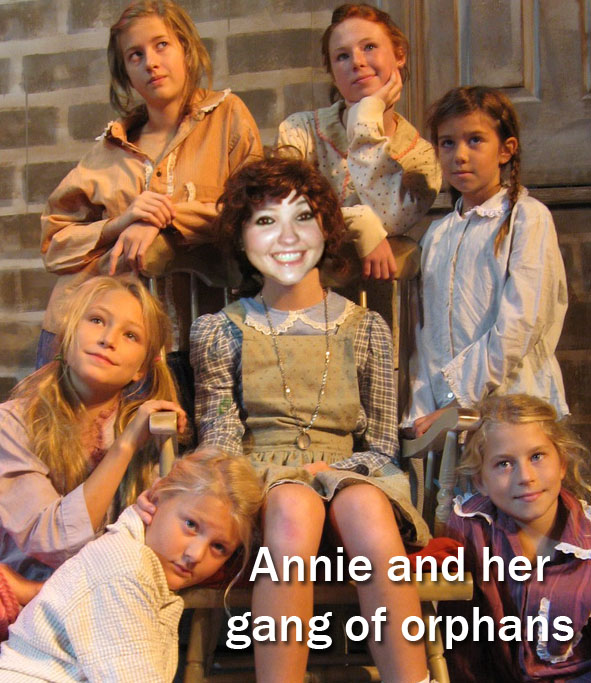 b: Would you rather be deaf or blind? or both?
m: This question really brings down the mood.
b: Life is hard.
m: Certainly not both.   Blind.  I can’t imagine not hearing music.  Wammmp.
b: But can you imagine not seeing your first born child?
m: Stop it!

b: What is the first Broadway show you’ve seen?
m: Phantom of the Opera.  I was in pre-school and I practically had a panic attack when the chandelier fell into the audience.  Excellent call on my parents’ part for bringing me to that.
b: Because the chandelier scene was staged, it makes me laugh to think of you panicking. Sorry.
m: It’s ok.

b: Would you rather run a Day Care? Or run a Home Depot?
m: Oh God.  Neither.  But if I have to choose, it’s Day Care.  Just because I’d be of zero help to anyone attempting to build a home or remodel a kitchen, and that orange smock wouldn’t fly with me.
b: I didn’t tell you that the uniform at this hypothetical daycare is also an orange smock.

b: Do you have any siblings? If so, describe their personalities in three words each.
m: Bridget: Older than me.
Patrick: Paler than me.

b: Before Colin, did you used to date Winnie the Pooh?
m: Yes. He actually proposed to me in 2007 on the Mets Jumbotron. But I said no. 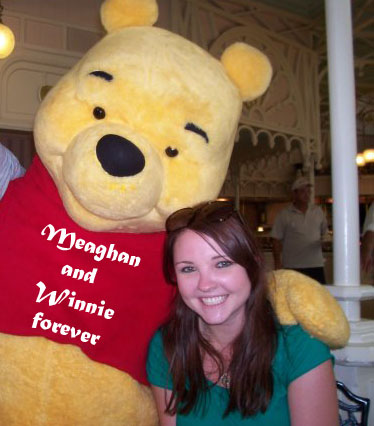 Well there you have it folks. Thank you Meaghan for your wonderful answers, for being my friend/co-worker, and for approval of the clothes I wear.