I went for a run last night on the boardwalk at 8pm. As I picked up my keys and grabbed my wallet, my sister told me to “only run where there are people around.” I replied by saying, “God I’m not that anti-social. JEEZE. I’ll do whatever you want. Just get off my back”. She hopped off my back- [I was giving her a piggy back ride at the time] and I walked out the front door.

I saw water droplets forming on the car’s windshield but decided to go anyway. My body was aching to be outside and stretch it’s legs like an athlete who craves gatorade, or a teacher who craves discipline, or a horse that craves a hay stack to eat. [even though I don’t really see how a stack of hay could be that appetizing]. I parked the car in a parking lot close to a restaurant located on the boardwalk so I knew the area would be populated. I used a bench to stretch, propping my legs on it–then jogged up the ramp onto the wooden walkway.

I began to run like the wind that was tussling my hair. Lightening struck in the distance. I thought, “Should I be outside right now?” Suddenly, I heard a deep voice chanting with an echo. I looked over the edge of the boardwalk onto the sand and saw a large Jewish Wedding being performed. The rabbi had a microphone close to his mouth. What a treat! Let me paint you a little picture of the scene… 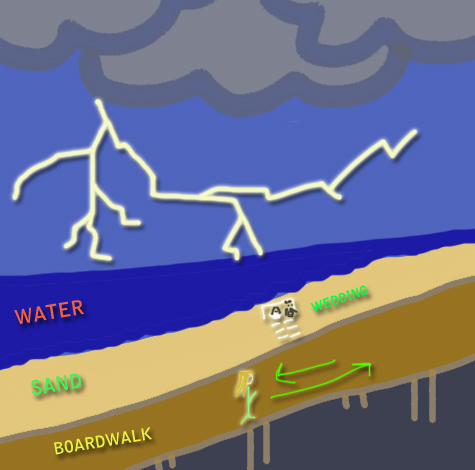 This is a pretty accurate depiction of the scene, I must say. I used the arrows to show I kept running back and forth, back and forth. Also note, everything is drawn to scale.

The air felt ominous as I stood at the edge behind the metal railing, stretching my arms and taking deep breaths in.

I then watched the wedding for a few minutes and heard them say “Mazel Tov”, which is a term used to express celebration. 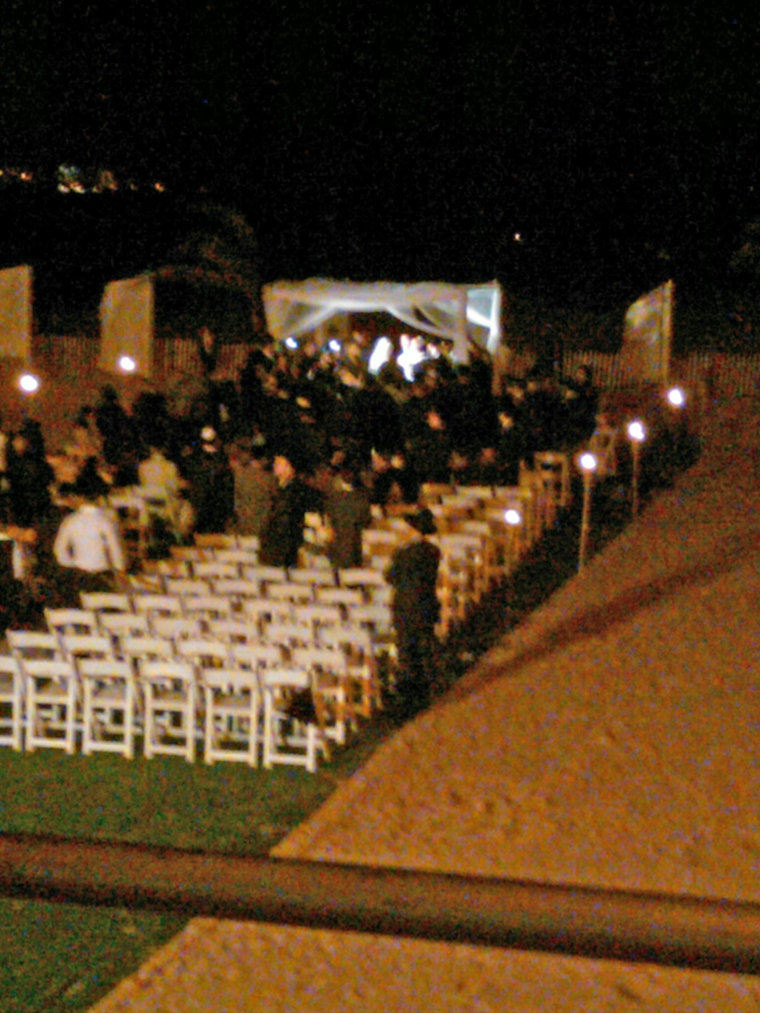 I was jealous that everyone was having so much fun. I continued jogging down the boardwalk and saw a bus boy standing in the vestibule of the catering hall looking out towards the ceremony. I said to him, “Yo, give me your threads.” I offered him 20 dollars.

We went behind the building and traded outfits [sketchier than it sounds]. All the participants made their way into the restaurant and we had a grand old time. I took the teen’s position as senior bus boy on the management team of the place. I gave the workers a pep talk before we served the food and organized us all to walk out into the main room with our hands behind our backs singing “I Think I’m Gonna Like it Here” from the made-for-kids-movie “Annie”. All the little kids were clapping and cheering.

As I was heading towards the metal push-doors leading into the kitchen, I tripped, knocking over a ceramic coffee cup that fell under a napkin. My sneaker smashed the cup and everyone looked to me and gasped. Literally, everyone gasped. I raised my hands in the air, took a deep breathe, and said “Mazel Tov!!!”. We all began to dance.